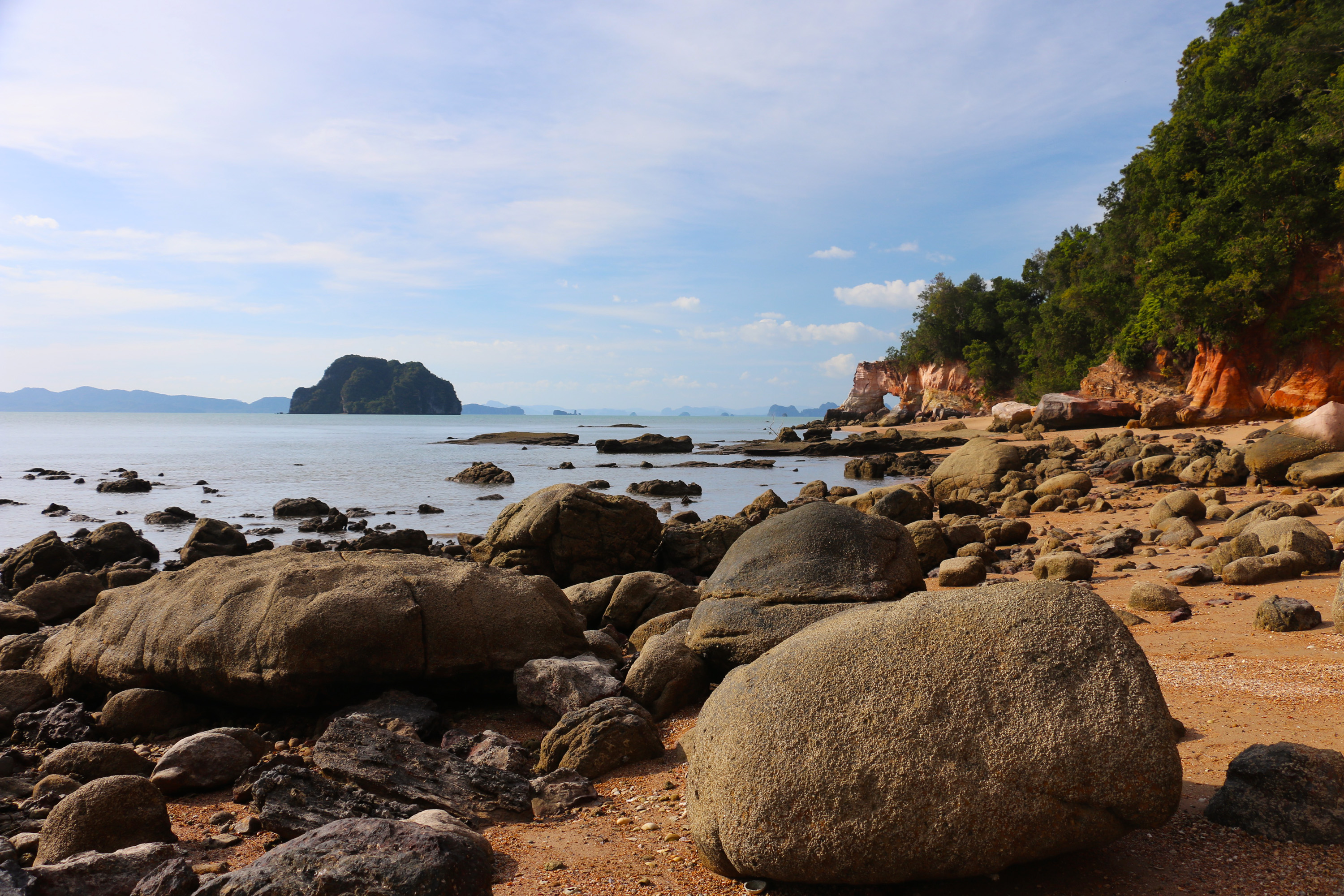 “We have a map,” the man at check-in to our backpacker bungalow hotel told us, lowering his voice slightly, his tone conspiratorial. “A map to the secret beach. It’s not that easy to get there, but it’s not far.”

Right, I’ve seen that movie. So has everyone else who goes to Thailand. I didn’t believe him until we followed his map to a perfect secret beach, and now I’ve got the pictures to prove it.

The secret about that beach, Maya Beach in the Phi Phi Islands, has been out for nearly two decades. Although there is a certain allure to that picture-perfect beach of The Beach, we only went to Phi Phi for the Scuba diving. I couldn’t bear to pay an entrance fee of 600 baht to see it. You shouldn’t have to pay to be let in on an old secret.

I had already seen a lot of perfect beaches in Thailand, particularly here on Tha Lane Bay. With those views of the limestone crags of the Andaman Sea, calm turquoise waters, and kilometers of empty white sands, the beaches here are pretty close to the platonic ideal. The area is undeveloped enough that it stills feel authentic, and empty enough that you can imagine the beach you’re on is yours alone.

But a real secret beach?

And then he pulled out the map. A hand-drawn, xeroxed copy, dog-eared from use. An artefact.

“You just have to follow the map towards the pier.” Ok, check, I know where that is. There is only one road into the village, and the pier is where we had gone sea kayaking into the mangroves just a few days before. “Once you get to the soccer field, turn right and the road will eventually turn into a dirt road. You’ll pass a green house on stilts. Then you keep following the dirt path, you’ll pass rubber trees on your right. When you come to the hill, you should get off the scooter and push it up. Don’t drive down this hill on your way back, you’ll crash. If you go on for another five minutes or so, then you will come to a gate. It is locked, but there is a hole in the fence on the left. Now you need to walk through the jungle for about fifteen minutes, there is a foot path so you probably won’t get lost. Once you reach a cliff overlooking the sea, turn left and you’ll see the secret beach.”

Ok, so just over the river and through the woods.

We waited until the sun had dropped a little further into the sky before heading out.  Following the instructions, but not quite believing we would find it, soon enough we found ourselves standing out on the cliff he had described, taking in the secret beach, completely empty and perfect, below. 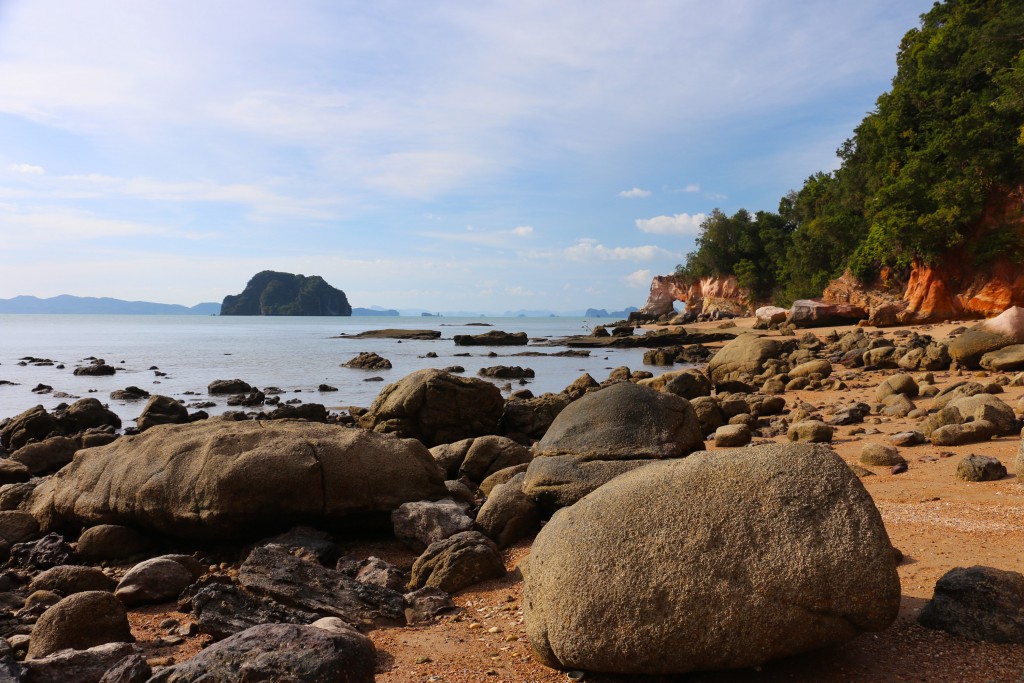 But there was another secret: how to reach it? The beach was a good 40 feet below where we were standing. We looked around in the jungle overgrowth looking for a path down, the key to the secret beach. Maybe he had left this one last part out of the instructions so we would really get to discover it for ourselves. A quiet act of knowing kindness that could easily go unnoticed, but without which the experience couldn’t be the same.

We both poked around for about ten minutes, looking for a way out and down. “Carly, I think I found it!” I heard Dominik call, and we surveyed the spot together. Yes, there was a path through the tangle of jungle roots. It just took a minute to see it, but as our eyes focused in, a set of stairs worn haphazardly into the roots came into relief out the enmeshed underbrush, as if it had chosen to reveal itself to us. 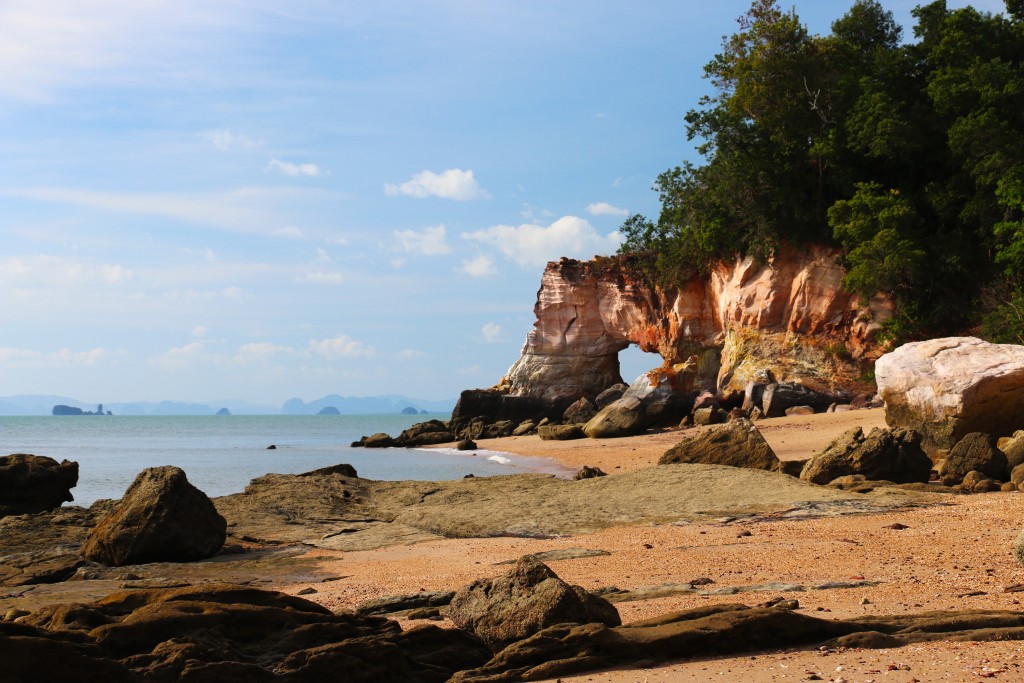 A few more minutes of carefully slipping down the steps in flip flops, we were there.

A wave of emotion washed over me, and I recognized it, for once, as bliss, that elusive relative of hum-drum happiness. We looked at each other and laughed, shaking our heads. What luck. What a privilege to be here.

And then we set out to explore.

In the late afternoon, the colors of the coast had become swollen and rich, as if ripened in the sun. The air was the same temperature as our bodies, the water even warmer. Trees edged out of the stones claiming their place in the sun, and the rock was streaked with vibrant reds, purples, and oranges so bright they looked almost man-made. 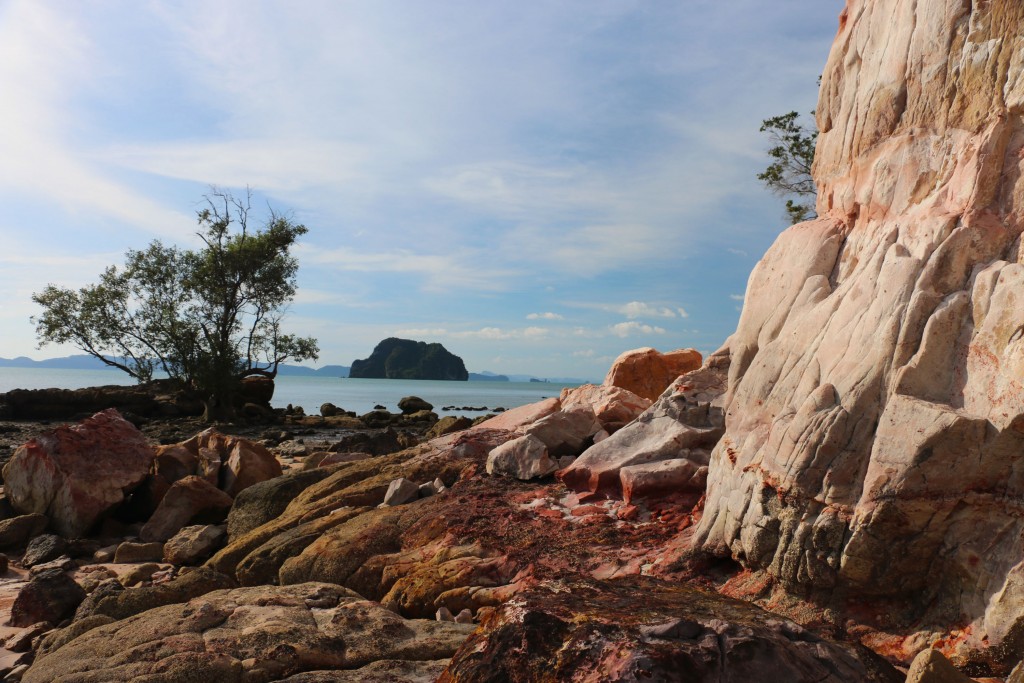 But nothing here was man made. Not a stone had been moved by a human to enhance the landscape. It just was.

It was as if every rock, tree, and grain of sand fell in just the right spot, making for an infinitesimally unlikely perfection and throwing doubt on the principle of randomness that we know governs the natural world. It can never feel the same when humans have sculpted the scene into something beautiful. This becomes something aesthetic, pleasing, but never perfect. And secrecy preserves this kind of original perfection.

As the tide was ebbing back into the sea, opening up more beachfront on the secret beach, we walked along together in silence before branching out onto own paths.

Dominik headed out onto the outcropping of stones jutting out into the sea. I wondered what he was thinking out there, but I felt it was right to leave him to himself and that landscape. 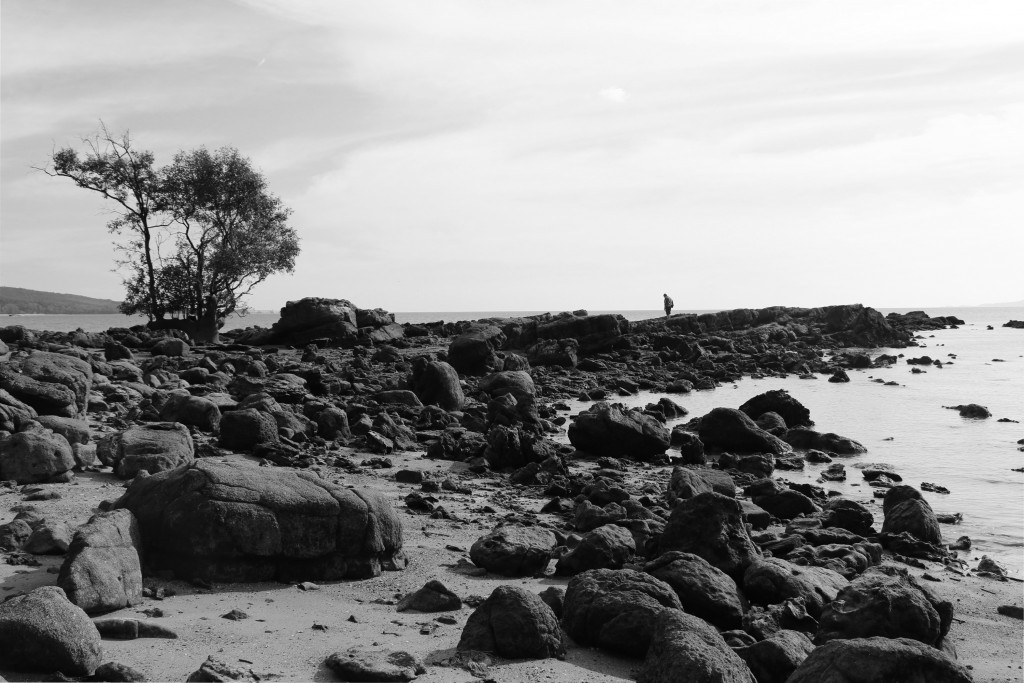 I headed further along the coast, coming onto the bay framed by the mountains and cliffs enclosing the primordial mangrove forests we had kayaked through a few days before. This really could be a place at the beginning or end of the world. As I walked, I stopped to inspect a small crab, turn over a sea shell. When was the last time I walked without purpose, I wondered. 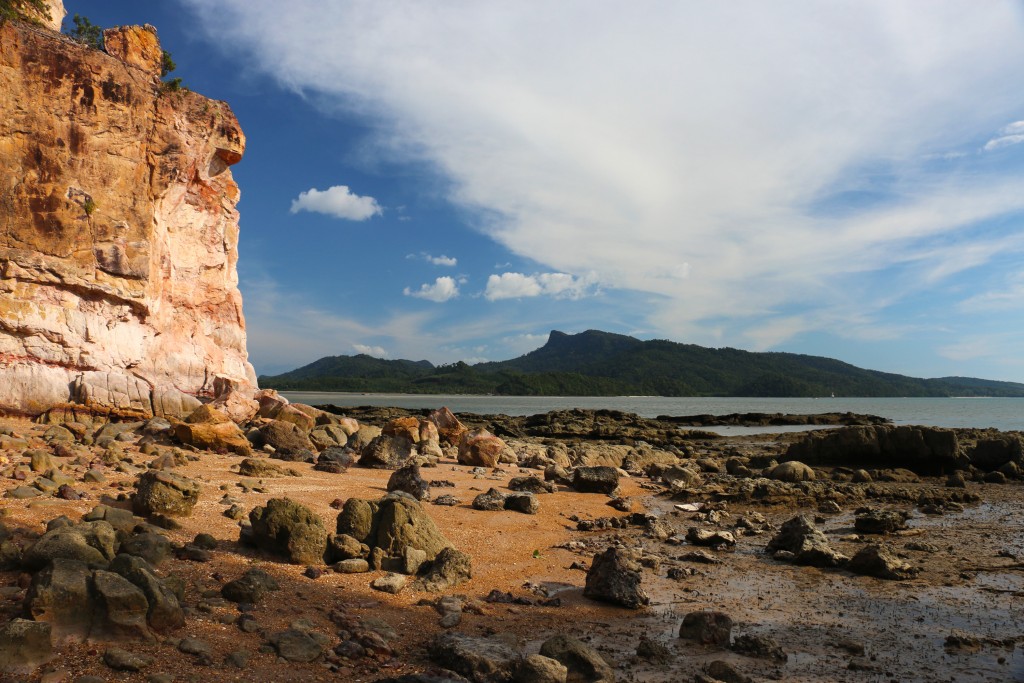 As we meandered back, me along the coast, Dominik carefully stepping along the rocks slick with saltwater, we came back together and walked along the beach in a gentle silence, where we found this perfect rock and laid out our towels in its shade. 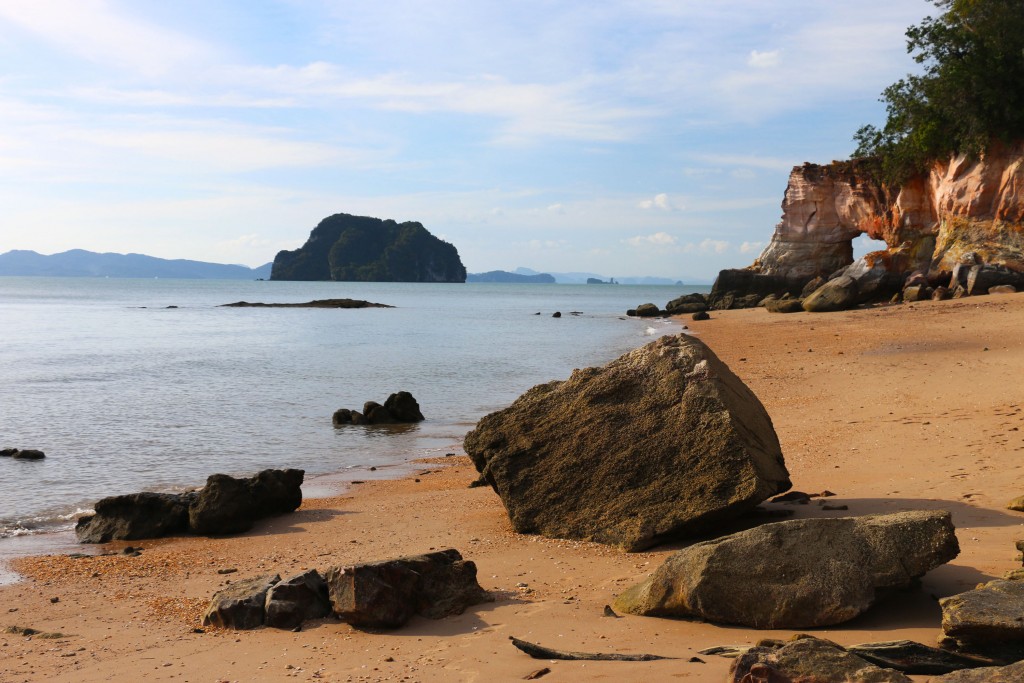 After some time, it’s hard to know how long really, the sun began to move lower in the horizon, the sea becoming glaringly bright. It was getting close to that time when we would have to leave. But we lingered a while longer until a longtail boat of Thai men pulled onto the beach. We came out from behind the rock, and waved, gathering up our things.

Turns out the secret beach wasn’t so secret after all. But that didn’t matter. It was their turn now. 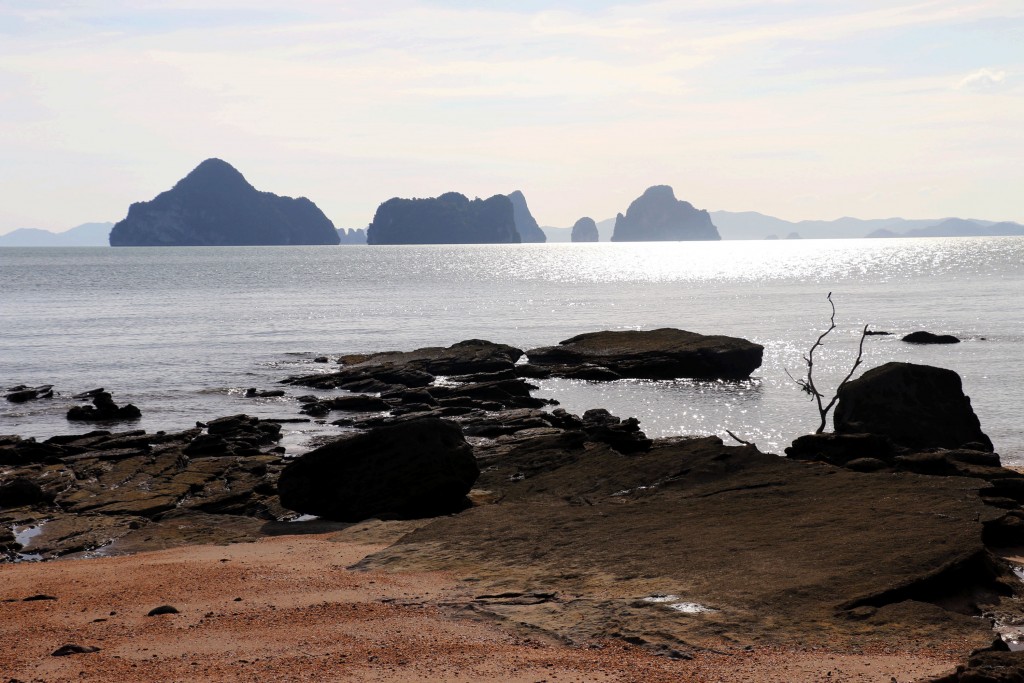