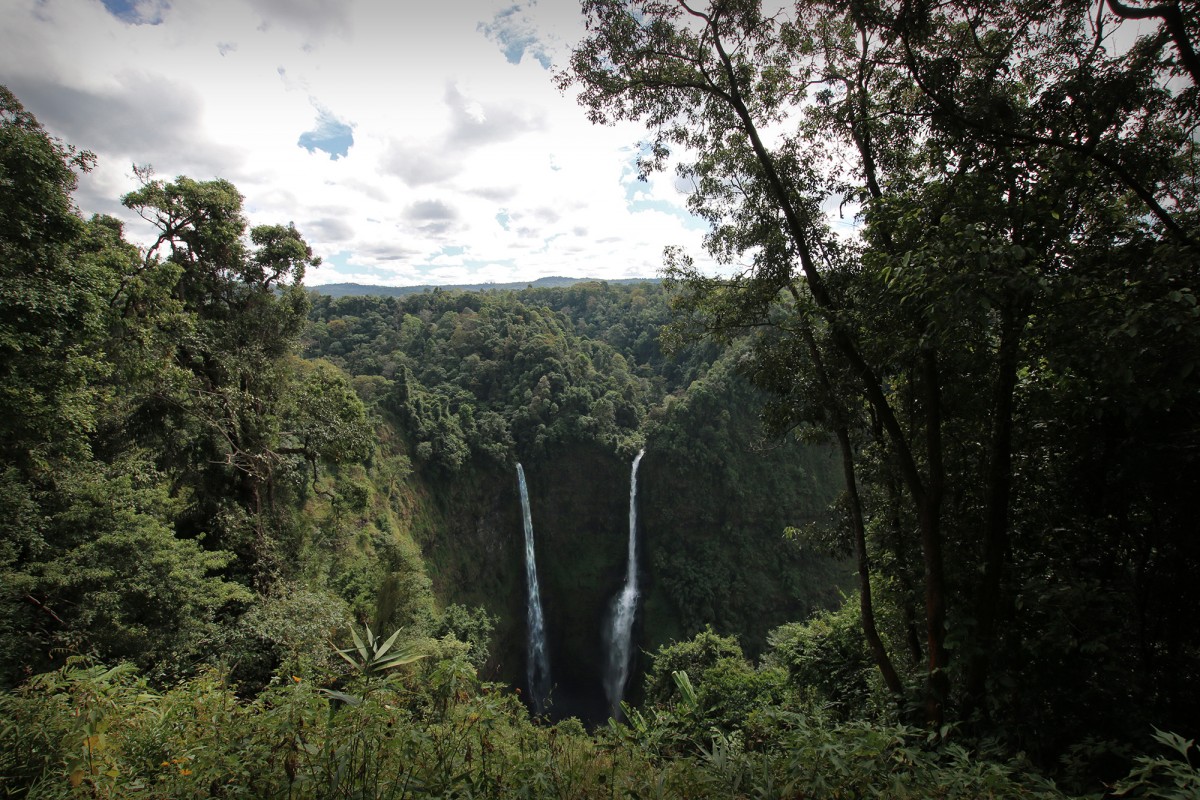 Laos’s Bolaven Plateau is another world of waterfalls straight out of Jurassic Park, quiet village life, and the best coffee I’ve ever had. We drove into the plateau with a rented scooter that maxed out at about 30 km/hour, not really knowing where we were going or what we were going to see…and were rewarded with landscapes that reminded me of what the word “stunning” really means.

The Bolaven Plateau crops suddenly of the gentle southern plains of Laos. The highlands are an unexpected jolt from the surrounding plains and riverside landscapes. It’s a different world up there.

For most visitors to southern Laos, the main draws are the 4000 Islands on the Mekong and the Bolaven Plateau. Both offer stunning waterfalls, a chance to experience quiet Laotian village life, and outdoorsy ecotourism activities, but they couldn’t be more different. The 4000 Islands are a seriously laid-back Laotian bayou, where the Mekong Delta meets mangrove. The Bolaven Plateau is a mysterious vertical island plateau of dark jungle and plunging waterfalls and traditional villages.

I’d never seen anything quite like the Bolaven Plateau in part because it’s pretty unique, geologically speaking. The impossibly green plateau is believed to have been formed by an extinct volcano: magma strained to erupt but never quite made it, resulting in a level bulge of volcanic bedrock jutting up precipitously from the plains of the Mekong below. The rich volcanic soil and cooler weather from the 1000m gain in elevation makes the Bolaven Plateau the fertile heart of Laos and its main agricultural region. The cool, wet climate is particularly conducive to coffee production, for which the region is famous.

From Pakse, the regional capital and staging point for trips to the 4000 Islands or onward travel to Thailand or Cambodia, you can take a 1-3 day self-guided drive of the Bolaven Plateau. I unfortunately only had one day, so I did a self-drive coffee and waterfall tour to the town of Paksong and back to Pakse. This itinerary is only about 60 km roundtrip, but with stops, it ends up taking 5-6 hours on a scooter. The three-day tour traverses over 300 km (see map below), and there are plenty of local guesthouses to stay at along the route.

I was looking for the perfect cup of coffee and the perfect waterfall, preferably together. What I hadn’t expected was that the scenery would be so dramatic, and the coffee so incredible.

I found driving in Laos to be better than driving in most developing countries, in part because there just aren’t that many cars on the road (yet). Scooters sort over to the shoulder, steadily chugging along, with people wearing surgical masks to keep the dust out of their lungs. Cars and trucks funnel down the center, crossing over into the opposing lane of traffic with little regard for the double line. The bigger (and more expensive) the vehicle, the more aggressive they tend to drive, so I learned to watch out for the luxury SUVs.

It’s not that there are no rules of the road in Laos, they’re just different. This is true of any country: Americans, for instance, don’t get the idea of passing on the left, and Germans never, ever, ever let you merge. Laotian drivers are pretty laid back, so when something unexpected happens, they’re usually driving slowly enough that you don’t have to fear for your life.  The main road from Pakse into the Bolaven Plateau is in fairly good condition, though the side roads to smaller villages and waterfalls are typically unpaved and pockmarked with potholes. 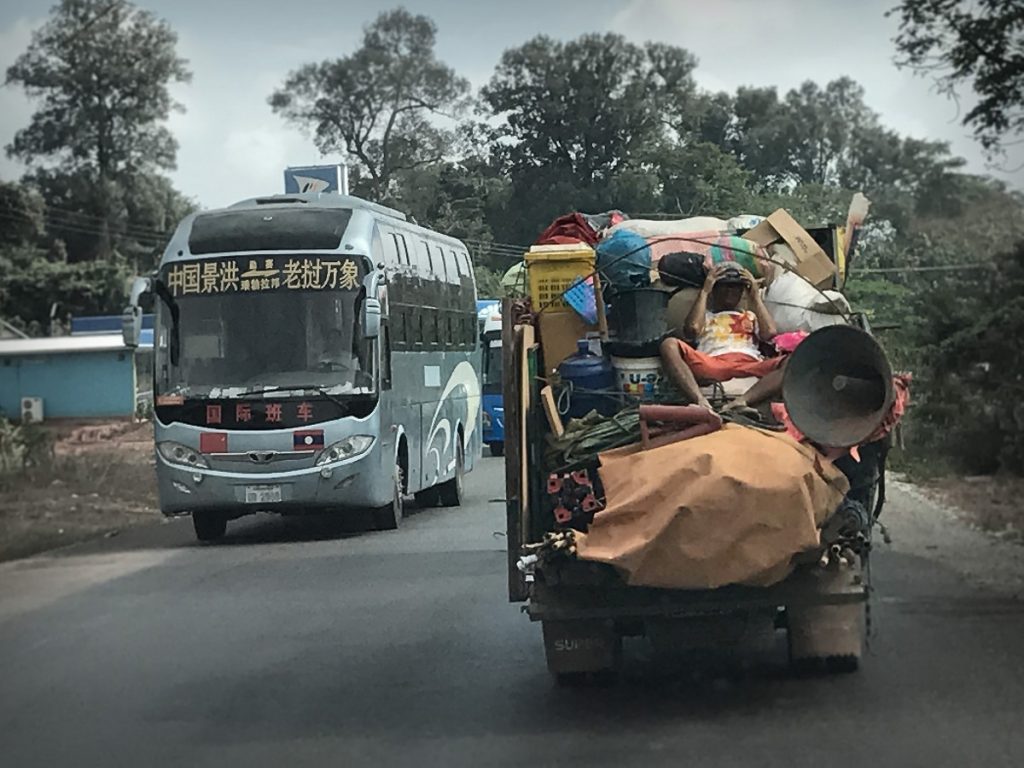 As I’ve said before, life in Laos does move at a different pace, and this includes the road. But if you’re not an experienced scooter driver, comfortable sharing the road with overloaded trucks, livestock, and people who don’t have driver’s licenses, the drive from Pakse to the Bolvaren plateau can also be done by taxi or rented car. With this caveat aside, I felt safer driving in Laos than in all the other places I’ve been in Southeast Asia.

History of the Bolaven Plateau

During the colonial period, the French exploited this region for its agricultural potential, cultivating bananas and rubber. After the French left, the American military ran thousands of covert bombing raids over the area during the Vietnam War to disrupt the Ho Chi Minh Trail, which ran just east of the plateau. (As we know today, American bombers were also instructed to just use Laos and the Bolaven Plateau as a dumping ground for live munitions before landing if they failed to find their targets in Vietnam, the worry being that landing with undetonated bombs would pose too great a risk to American pilots.) Today, tourism, coffee production, and logging are the main commercial activities.

The region’s jungles are tempting for hikes, but any hiking should be attempted with an experienced guide, as unfortunately, there are still large areas of this region contaminated with unexploded bombs (UXO) from the Vietnam/Secret War period.

The 1000-meter ascent into the Bolaven plateau gets chilly, fast, and I wished I had remembered to bring a jacket. Since it had been so unwaveringly hot in the 4000 Islands, I’d forgotten that yes, it does also get cold.

Riding in, I had the feeling like we were entering a new country. Clouds gathered above, conspicuously blanketing just the plateau, as if there were some invisible force penning the clouds in from encroaching beyond the plateau’s perimeter and infiltrating the surrounding lowlands.

The landscape and mood are darker. All of this conspires to give the place an inexplicable geological charge – like if I had pulled out a compass, the needle might spin. Enchanting, but not inviting. Brocaded jungles. Hidden grottos behind waterfalls. Furious whirlpools downstream. Stones covered in a green skin of moss. A menagerie of flora and fauna, some species surely still yet unknown to Western science.

But then there are also familiar scenes of rural Laos: women selling fruits and vegetables at stalls lining the road, mothers bathing their children in front of their homes and tending cooking fires, men cutting down green mangos from a tree with machetes, groups of uniformed kids walking home from school.

On the way to the town of Paksong, the first waterfall, at kilometer 38, is Tad Fane. It’s really unlike anything I’ve ever seen.

The double waterfall drops abruptly off the southern cliff of an enormous canyon. Without warning, the jungle just breaks off, opening up to air and sky, and the twin cascades plunge the 120 meters to the bottom. The torrent roars across the canyon.

Tad Fane has everything that is so alluring about a dramatic landscape. It’s enchanting and deceptive. If you were lost in the maze of the jungle, trying to follow a stream of running water to the lowest point and a way out (all water eventually travels to the sea, even in the deepest jungle), it is entirely conceivable that you might just walk over the edge, and, blinded by the sudden light, step onto the air and fall into the mist of one of the cascades before you even knew what happened. It’s a landscape that swallows up.

Tad Fane is a place that reminds you of what nature is really made of. The size and scope of the canyon dwarf the sky. We stood hypnotized on the viewing platform, watching the water fall for a good hour.

Tad Fane is a place that genuinely brings tears to your eyes. Laos is somewhere that still has places like this. And what’s even better: Laos doesn’t advertise its assets, so you don’t even know what’s waiting there when you happen upon the most beautiful place you’ve ever seen.

The next two waterfalls on the way to the town of Paksong are also beautiful, but not quite as unspeakably so. Tad Yuang is close to Tad Fane, at kilometer 40. It’s more of a park, where people come to visit the local vegetable market and picnic at the top of the falls. Without any viewing platforms or signs warning of the obvious, you’re free to walk up to the very edge of the waterfall and peer over.

Tad Yuang doesn’t offer the atmospheric seclusion of Tad Fane, but the mood is lighter and cheerful. The stairs down to the viewing platform are extremely narrow and steep, but the view is worth the wet climb down:

Across the road from the side roads that lead to both Tad Fane and Tad Yuang is the dirt road to Tad Champi. It’s a quiet waterfall, with a large pool for swimming.

Even with a one-day tour of the Bolaven Plateau, I left feeling like I had seen an unusual range of beauty just kilometers apart: first was the otherworldly Tad Fane, then Tad Yuang, impossibly green, and peaceful Tad Champi.

As we drove down off the plateau on our way back to Pakse, the wind became noticeably warmer. With my back now to the plateau, I swear I could feel a slight a magnetic force, pulling me back towards this  place. Even now as I write, I wonder what would have been waiting for us if we had been able to continue on further into the Bolaven Plateau.