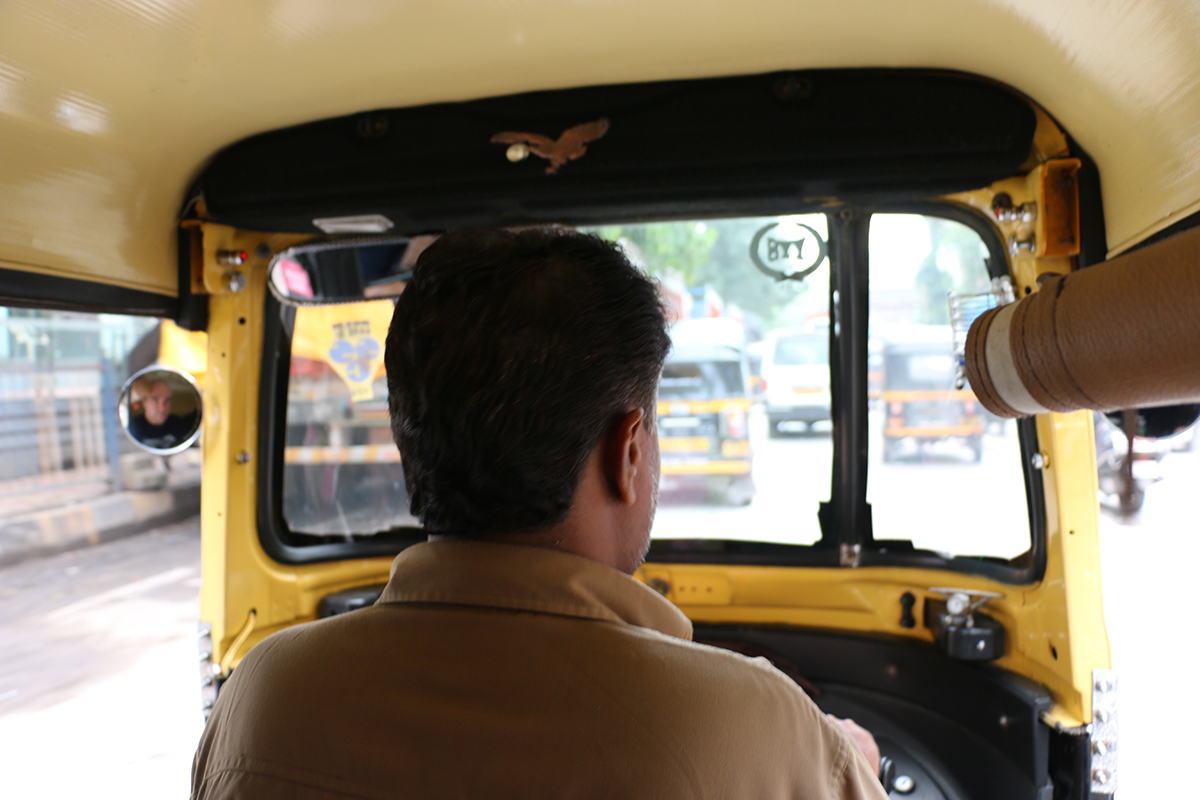 India is another world.

The first impressions of India are overwhelming. The chaos greets you the minute you exit the airport in a disorienting force of scents and smells, noise and colors, faces of passersby, movement. As you make your way into the scene, you join the cast of a world unlike anything you have ever been part of before.

First images: smog simmering the city of New Delhi in a noxious stew; later in Mumbai, our final destination, slums, jammed into every available inch of space, bordering right up onto the airport jetway. Cars clogging the roads, driving just inches from each other, absurdly close, all following the path of least traffic resistance, threading in between theoretical lanes and navigating around people, donkeys, buses, and rickshaws moving in a multitude of which ways, but generally forward in the right direction.

And then the poverty: women and men living under plastic tarps slung between trees on the side of the road. Public urination. People rooting through mounds of garbage alongside feral dogs and big black crows. Amputees sitting alongside the road, severed legs stretched in front of them as cars race perilously close by.

It’s one thing to see this world in images, as dislocated representations of another reality. But it is different, it’s really different, to see this in real life. The sense of dislocation comes from the proximity, from sharing the same space and still being so far apart.

I began to feel desperate. I have to leave. I can’t stay here.

The impulse to leave was strong, and I am experienced traveler. With more than 40 countries behind me, I was loathe to admit it, but I had been hatching escape plans in the taxi taking us to the hotel. I couldn’t quite believe what I was seeing just outside the window. And with each stomach-dropping turn, the driver was also forcing me to face my own mortality as he weaved in and out of traffic like a man possessed.

I had been outside of the airport for no more than 15 minutes and I was already exhausted from my first trip to India, with the continuous stream of flight-or-flight responses pumping from the brain through the body.

I remembered how I had scoffed at this story: a friend from college took a trip to India after graduation, where he planned to travel solo for three months in a voyage of self discovery. After landing in Delhi, he managed to get pick-pocketed outside the airport at the taxi stand, and once he reached the hotel, he opened the door, shook his head, and told the driver to bring him back, where he took the next flight home to Detroit. His first trip to India lasted less than a day.

Now I undestood. But beyond the dizzying and startling first impressions of India, I had a sense that there was something here worth sticking around for. 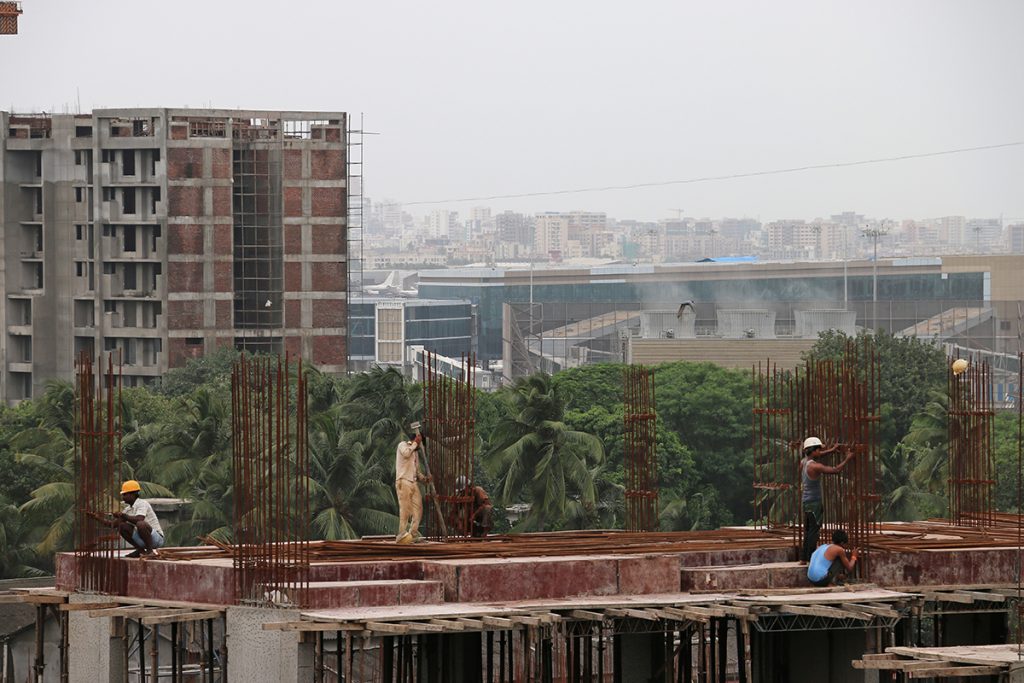 The snarl of traffic eventually loosened, and we sped along, finally arriving at our hotel to get a little rest before meeting our business partners. The sleep smoothed my nerves, and a few hours later, we decided to venture back out into the unknown.

Riding in a rickshaw to meet our business partners, I was again confronted with my own mortality as our driver narrowly dodged people, cows, and other vehicles.

But as the day wore on, white knuckles unclenching, it didn’t take too long to see that there was an order to this madness, and everyone knew their place in the hubbub. The gradient of fear brightened into excitement.

After a promising first meeting and meal with our welcoming business partners, we were all feeling much better. I knew I would be able to do this.

When we left the restaurant, it was pitch dark, and it was time to get a full night of sleep to ready ourselves for the days of meetings ahead. We hailed a taxi to take us back to our hotel, and the driver pulled up, looking a bit perplexed by by our group, our motley crew of “Westerners.” I sat up front with him, and he soon launched into a series of friendly questions, trying to figure out what all these “foreigners” (his words) were doing in India.

He asked us if it was our first time in India, and we told it wasn’t just our first time, but the first day. He smiled excitedly. When he learned we are all from different countries (USA, Germany, and Greece), he thanked us enthusiastically for giving him the opportunity to drive us, saying “I am so lucky to drive you tonight!” His hospitality, his enthusiasm, and his humbleness won us over immediately.

He couldn’t stop talking, asking us questions in rapid-fire, not always waiting for the answer, smiling, relishing every mile of his unusual fare. At one point, he apologized for his English skills, saying, “I am sorry ma’am that I am not better educated! I wish I speak better English for you!” I assured him his English was great, and he beamed. It was. (As I would come to find out in the coming days, English language is a big social and economic dividing line in Indian society.) 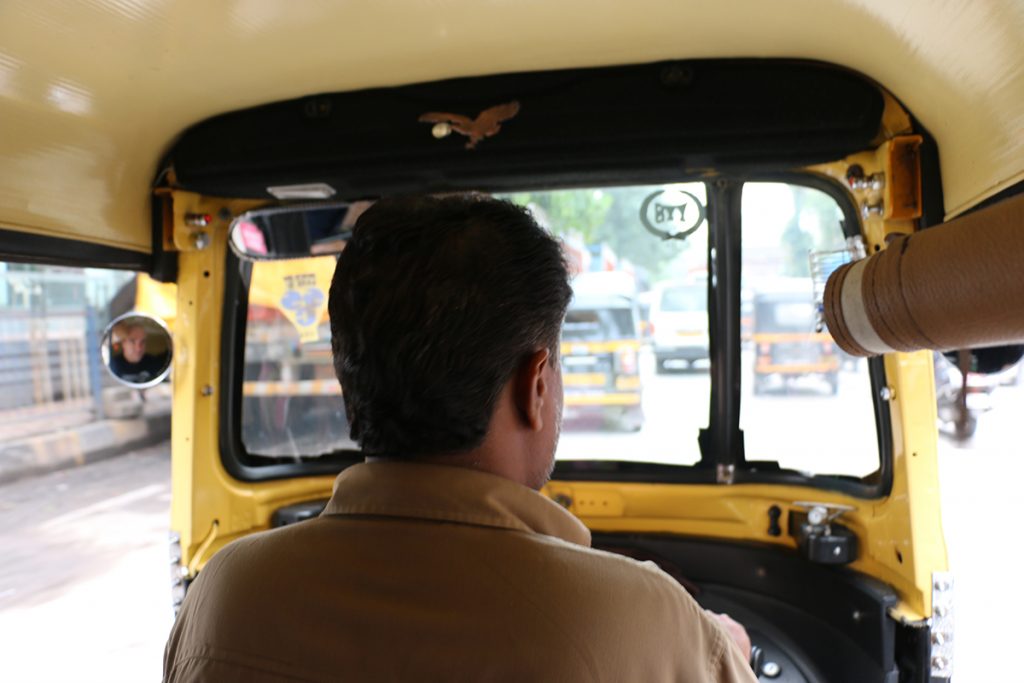 He spun us some tall tales about India, including the incredulous claim that in his 15 years of driving a cab on the streets of Mumbai, he had never once had an accident. I asked him what the rules of the road in India are, and he replied, “What are rules of the road?,” puzzled. I’m not sure if this was a question of language or culture, but when I started laughing, he did too. It was like we were old friends laughing over an inside joke, the one’s laughter making the other laugh harder.

Taking his eyes off the road for longer than I was altogether comfortable with, he looked over at me and beamed, “We’re making lifetime memories right now!”

When he dropped us off at the hotel, it must have only been 15 minutes later, judging from the meter, but it seemed like hours. And now, the ride was over too soon. He asked me, a bit shyly, to pose for a picture with him: “You know, for the lifetime memories.”

I went to bed that night knowing that it had been a good day because it was one I would never forget. Alongside the exhaustion of flying and waking up on the other side of the world – a completely new world – was a growing sense of exhilaration, that familiar and frenetic pulse of possibility that traveling sometimes taps in to. A feeling that anything could happen tomorrow.

This is what I look for when I travel, and India might just be the place I had been waiting to experience for my entire life.

I’m addicted to this feeling. The anticipation of the unknown. But it only exists at this moment in a journey, when everything is still new, unusual, scary, thrilling, uncomfortable. It is what keeps travelers like us on the road, in search of new places and people that can slow down the relentless forward push of the clock with moments like these, what our taxi driver called “lifetime memories.” Those times when days might as well be months. When a passing conversation with someone you will never meet again becomes part of the way you now see and understand the world.

Curled up in bed, TVs from open windows in neighboring apartments blasting foreign words and music above the din of the rattling air conditioning in my room, I could barely sleep, wondering what tomorrow would bring. But I also didn’t want to fall asleep. Tomorrow, the first day would be over, and I knew that I would only get to go to India for the first time once in my life.