One night in Bangkok, at least for us, and surely for most people who come here, is nothing like the song. It probably was, three decades ago, but Bangkok seems to have since cleaned up its act and grown up. Here’s a story about arriving in Thailand and falling instantly under the city’s spell.

Most travelers to Southeast Asia will probably begin and end their journey in Bangkok. After those disorienting international flights halfway around the world, it only makes sense to spend a night here to get a taste of what Bangkok, and Thailand, have in store for you.

The dazzling temples, food stalls and street hawkers of yore are still there, but they are now nestled in between sleek skyscrapers bearing names of multinational companies and homegrown Thai businesses. In the distance, high-rises provide an optimistic backdrop for Bangkok’s future, while older apartment buildings with corrugated roofs and golden spires of Buddhist temples still fill the foreground. It’s the best of both worlds, but there can be doubt about Bangkok’s trajectory.

For a city of 10 million, Bangkok is clean, calm, stylish, and well run. As we soon discovered, these first impressions hold true for the entire country.

In our taxi from the airport, the traffic was as to have been expected from a sprawling world metropolis: even at 8pm, the highways were still a mess. But the cars were almost all new or in excellent condition (nothing rusts in this glorious climate), and people were driving at a reasonable speed, obeying traffic rules.

About halfway to the hotel, though, we hit a complete stand-still of well over a half an hour. We had no idea what was going on, but the vibe was calm. People stepped out of their cars to look, but quickly retreated back into the air conditioning. From where we were, only a police blockade could be seen. After some time, an entourage of expensive black European automobiles waving flags sped past, and the blockade was lifted immediately. The taxi driver gestured and said, “King or Royal Family. Do you have traffic stop for king in Germany?” Dominik said, “No, in Germany we have a Chancellor, but she not important enough to stop traffic for.” The taxi driver replied, a bit puzzled: “Oh. Every Thai people love king!”

My expectations of Bangkok were, well, more seedy than chic. In the movies, this city is always depicted as a character of the night, neon-lit, with frenetic shots snaking through back alleyways, opening up onto clandestine establishments where anything can be procured for the right price.

I suppose when I booked our hotel near the legendary Khaosan Road, the first stop for many visiting southeast Asia, I half expected this depiction to be a little bit true. But on the Khaosan Road, Bangkok’s main drag of traders, travel companies, guesthouses, its purveyors of illicit delights have all but been replaced by stalls selling elephant T-shirts and bootleg Northface backpacks, burrito joints, and trendy coffee shops. 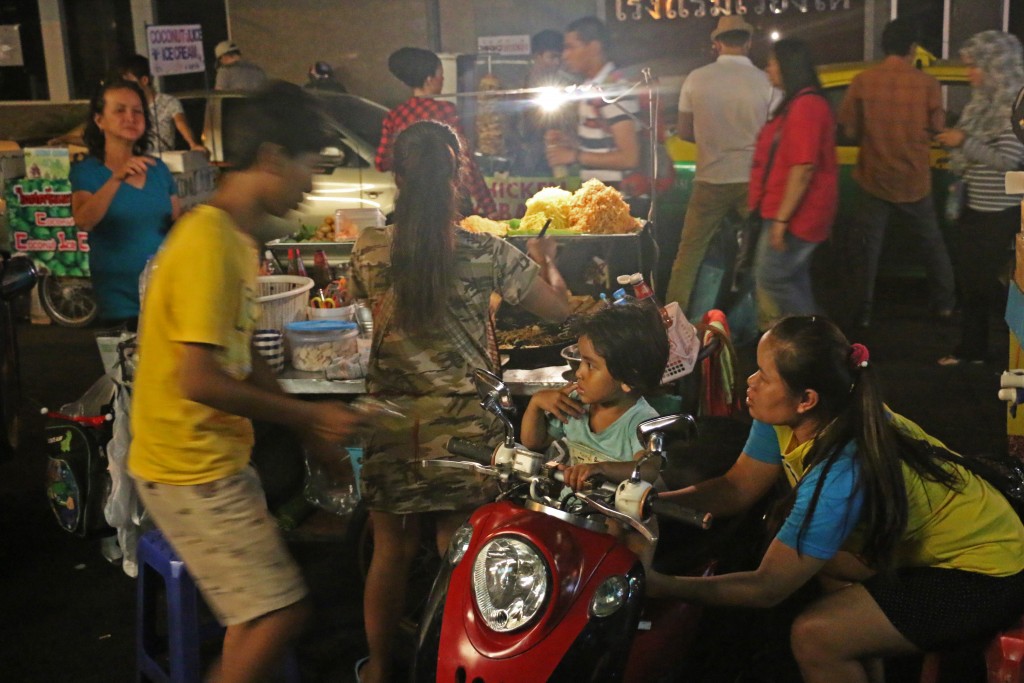 It was crowded and colorful and a bit chaotic. Yes, there were Western tourists of a certain age escorted by young Thai people through the night. But no one paid them much attention. And yes, there were a few stalls selling roasted insects, a delicacy in Northern Thailand, but the only thing actually being sold at these stalls was the photo-op for tourists, at 10 Baht per shot. Like every modern city, gentrification has arrived in Bangkok and has even managed to tame the wilds of Khaosan Road.

On the outskirts of the tourist drag, street food peddlers set up shop, selling mostly to the Thais working at the massage parlors and shops on the Khaosan Road. These are the places to eat: the hawkers toss together rice noodles, bean sprouts, a protein of choice, and garnish it with something magical (as I learned later, fish sauce, tamarind, brown sugar, and lime) and serve it up on a banana leaf (nature’s alternative to Styrofoam) for around one dollar. 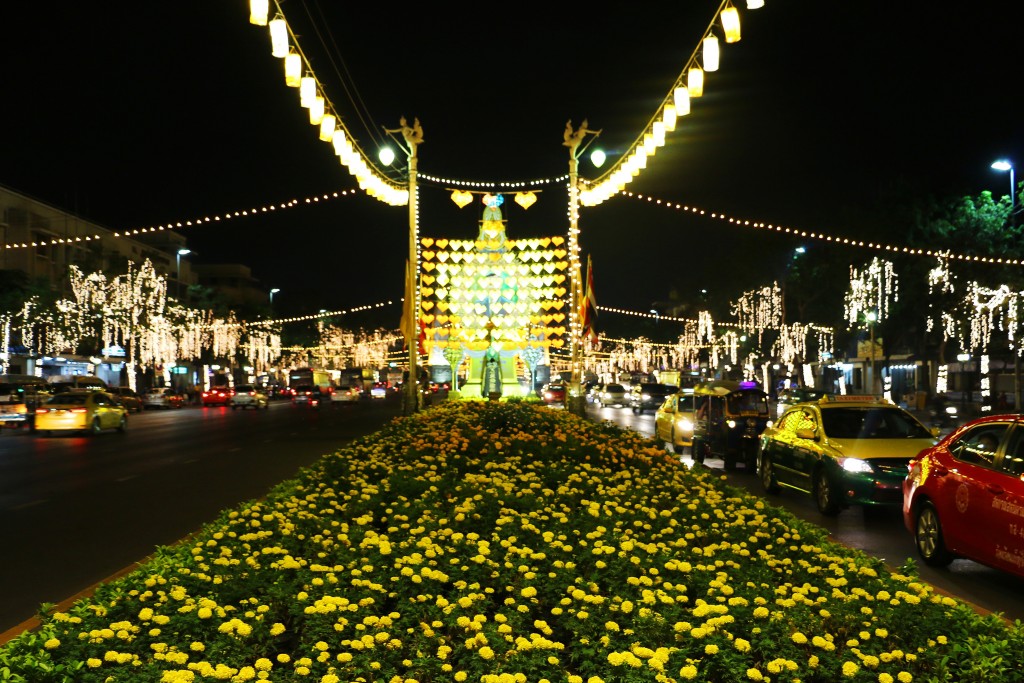 Feeling jet legged but electrified to finally be in Bangkok, we start walking along Ratchadamnoen Klang Road, a wide boulevard illuminated with white lights, marigolds, and displays prominently featuring the King’s noble visage. Together with the grainy images of the King in a range of benevolent poses, the soft white light bestowed the city with a kind of peace that was at odds with any depiction I have ever seen of Bangkok. 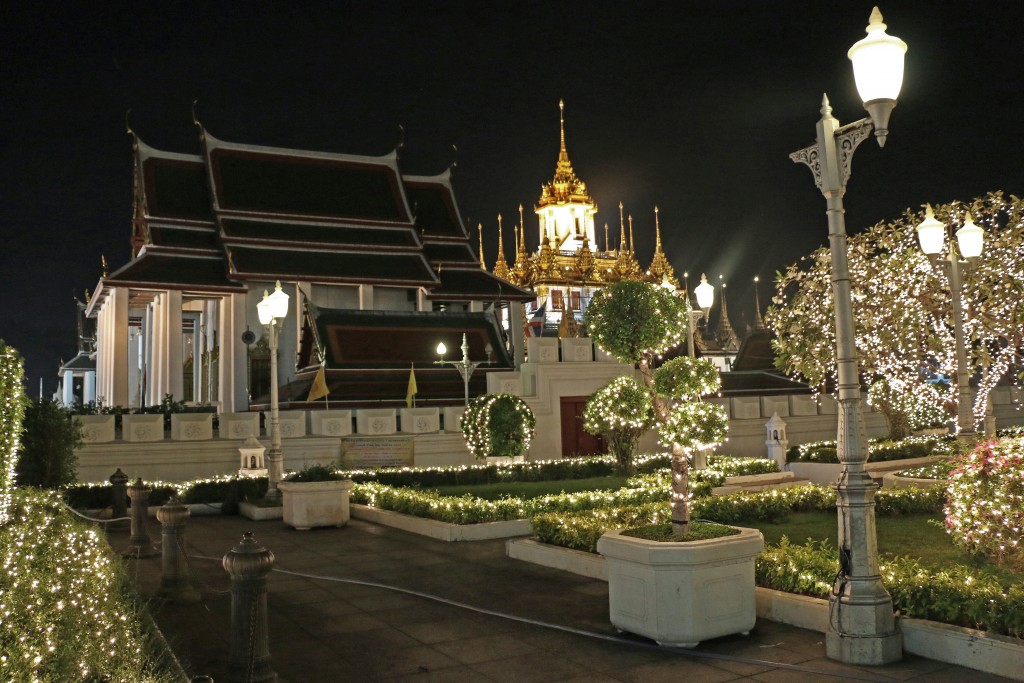 We rounded Democracy Monument and ended up at the Royal Pavilion Mahajetsadabadin, which was lit up like a good dream. Just behind, the beautiful nineteenth-century Buddhist temple Wat Ratchanatdaram shone against the night sky. Its 37 metal spires represent the 37 virtues that lead to Enlightenment in Buddhist belief. I was beginning to suspect that Thailand has mastered most, if not all of these. 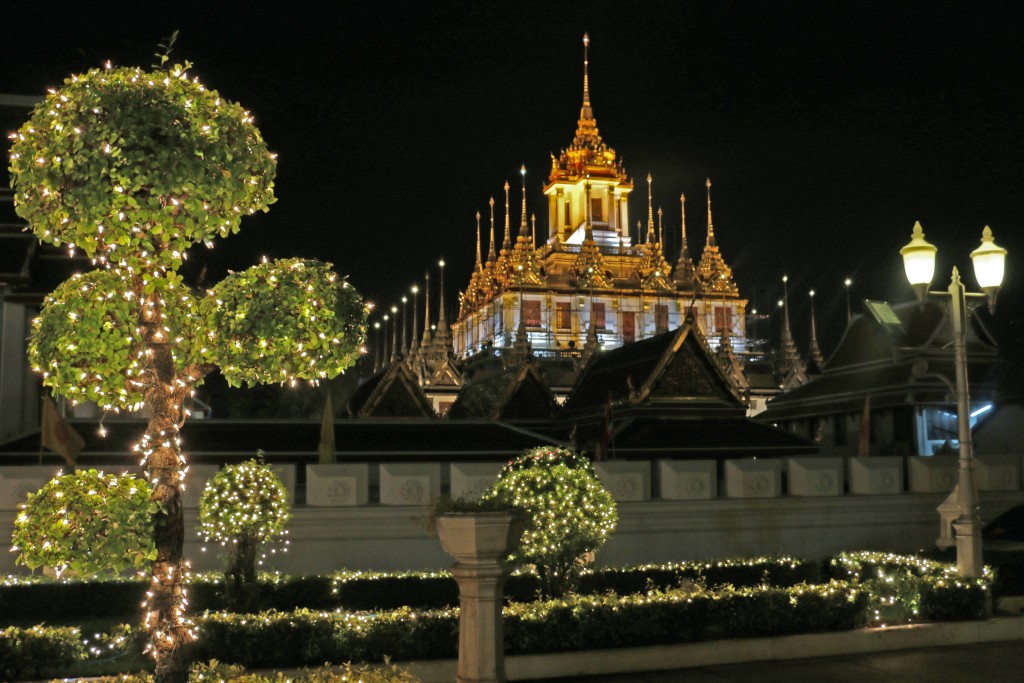 As we walked down the boulevard, the warm, slightly muggy night air soaked up our cares, and home felt very far away, another life ago even, and we wandered, dazzled, through the twinkling night.

2 thoughts on “One Night in Bangkok”