How does that song go? “One night in Bangkok makes a hard man humble, not much between despair and ecstasy.”

The same goes for Phuket. But one night in Phuket is one night too many.

Phuket is called the “Pearl of the Andaman,” a moniker dreamt up by marketing executives to entice package tourists to the long white-sand beaches of the southern Thai peninsula. It maybe was an undiscovered gem decades ago, but today it’s an overbuilt and unloved place. The refrain of that song goes: “One night in Phuket and the world’s your oyster / The bars are temples but the pearls ain’t free.”

We arrived in Phuket (pronounced Puket—the H is silent), the so-called “Pearl of the Andaman” via speedboat ferry from the serene island of Ko Yao Yai. Phuket is a peninsula that borders the Andaman Sea to the east and the Indian Ocean to the west. With this long stretch of coastline and white sand beaches, it underwent heavy tourist development in the 1980s, and today the coast is teeming with large resorts and package tourists, culminating in Phuket’s sin city of Patong, where it’s said that anything goes.

The ferry was packed, mostly with Thais. The Thai men gave up their seats to the women and children, and gestured at any Western men sitting down to do the same. The Thai men held onto the railings in cool, nonchalant poses, staring out into the distance through their knock-off Raybans.

After some chaos at the pier, we arranged for a taxi with a lovely Danish-Croatian couple, whose 13-month old baby was quite cooperative even in the rising mid-day heat. We arrived at our guesthouse, a cheap Airbnb find near Nai Yang beach, less than five minutes from the airport, where we would only be staying the night before departing for Chiang Mai early the next morning.

A middle-aged tourist enjoying a cold one at the reception greeted us as if we were long lost friends. It was around 12.30 and the man was completely drunk, declaring that this hotel is the best he’d ever seen. While it was a fine guesthouse, it cost only 800 Baht (20€) per a night—in the high season. But it was clean and had air conditioning, two luxuries in this price category.

The man catching his late-morning buzz was traveling solo in Phuket, which can mean many things in other parts of the world, but here it means only one thing. He told us he was from Vancouver, but he was slurring his words so badly, I couldn’t make out his accent and mistook him for Russian.

We parted ways hurriedly from the sex tourist and walked over to Nai Yang beach, just about a half a kilometer from the hotel. The strip honestly wasn’t as bad as I was expecting, given my low expectations. This is poor-man’s Phuket, but the underdeveloped tourist infrastructure is far preferable to the usual suspects of an overwrought tourist drag catering to an international crowd—KFC, McDonald’s, an Apple store, and Starbucks. At least the hotels weren’t sprawling, and most weren’t located directly on the beach, which preserved the main attraction. In fact, there wasn’t much here, just an array of run-down massage parlors, Tiki bars, and restaurants advertising “European Food, Seafood, Thai Food.” In that order.

The beach was actually nice, a long crescent of whitish sand on a calm bay. Or it would have been nice, if it weren’t fringed with garbage and stray dogs nosing through the rancid plastic sacks.

The mid-day heat had arrived in force, and we found a place in the shade of the trees lining the beach, along with an entire Russian village of package tourists. We moved our towels twice due to drunk and disorderly behavior of our neighbors and out-of-control children.

Some of the people on the beach were covered with bandages wrapped around their legs, or arms. What’d happened? A Scooter spill? Surfing mishap? Sea urchin accident? But no—the bandages were just covering fresh tattoos. That explained the odd bandage wrapped around the neck.

Later that evening, we decided to get some dinner before turning in early for our morning flight. Every place seemed sadder than the last. Enormous bilingual menus (only Russian and English) of at least 20 pages that have become sticky over years of use, offering everything from pork schnitzel to chicken Kiev to pizza and pad thai. No real Thai food, from what I could tell.

After rejecting every other restaurant on the drag, we settled on one where the fish on display looked quite fresh. But when I sat down, I noticed the leathery-looking couple next to us eating shrimp cocktail with what looked like mustard and garlic bread. The prospect of dining here was making me melancholic (“…nothing much between despair and ecstasy…”), so we ducked out before the waiter came back.

As we strolled back to the hotel, I spotted a trio of Thai masseuses eating noodles and salads out of Styrofoam containers. I ask them where they’d gotten their dinner and they pointed at a food truck across the street. Salvation! We ordered Larb Na (spicy minced chicken with basil leaves), Pad See-Ew noodles, spring rolls, and Tom Yum soup, with fresh coconut juice. These women cooked with joy and made some of the best food we had in Thailand in about 3 square feet of space with little more than one frying pan. 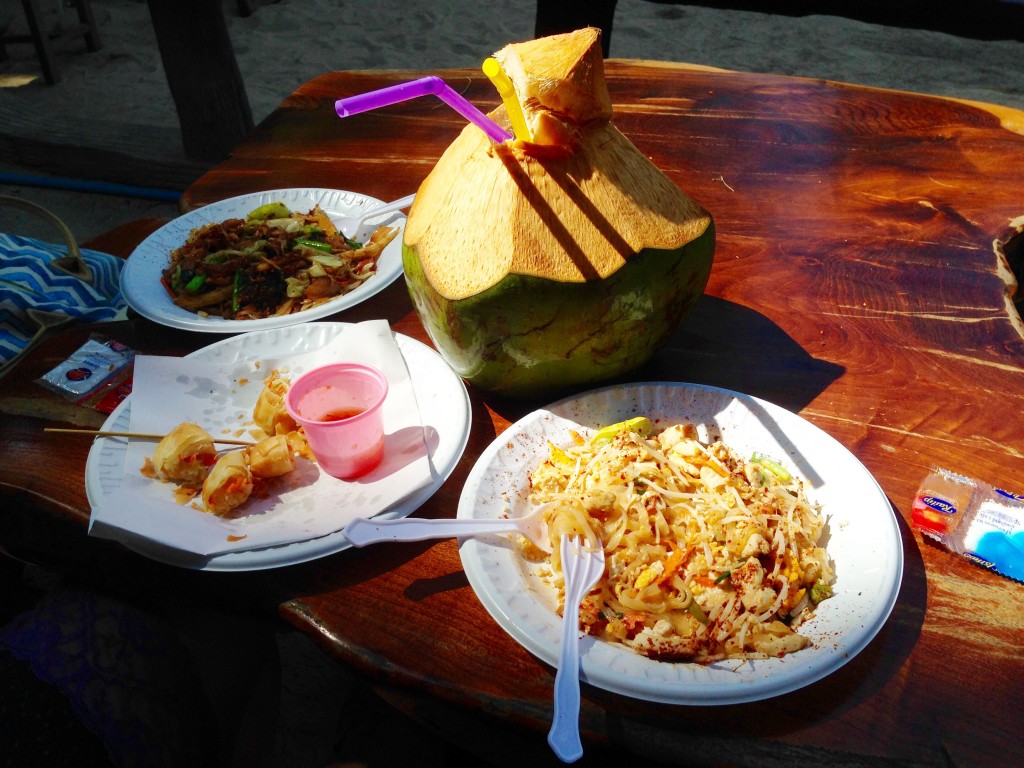 After dinner in Thailand, we often got a massage as dessert. One massage place close by was open, and we decided to try out the foot massage. The women ushered us in quickly—the dark interior from which masseurs emerged sleepy-eyed had me worried that we had chosen the wrong kind of massage parlor. But it was ok, it wasn’t that kind of place, and two women got to work, the one massaging my husband interrupting every few minutes to answer her phone or send a text. This was definitely most unlike any other massage we have had in Thailand, and not in a good way.

About halfway through, an emaciated Russian woman wearing only a bra and underwear stumbled out from behind a curtain in the back where she must have been getting a full body massage. She was staggering, as if the floor of the massage parlor were the deck of a ship about to wreck and stumbled out onto the street, her masseuse scurrying out after her to wrap her in a sheet. Her eyes were dreamy, she was blissed out and halfway conscious. I think she was on Molly…the only variety of ecstasy available here.

The women massaging our feet cackled at the drugged out woman and continued to banter amongst themselves. They have seen this, and much more before. I had often wondered what terrible things the Thais must think and say of us Europeans and Americans, what with our big, burnt bodies and pushy but clumsy foreign demands. Now I knew what I have always suspected.

Towards the end of our massage, a Russian couple came in. The man lay facedown on a massage table. His feet were full of lacerations (?), which one masseuse began to dress with antiseptic and bandages (more bandages!). Thai massage has medicinal value, but surely a clinic would have been a more appropriate place for his problem.

My tolerance for all of this had reached its limit, and I just wanted to make it back to the hotel and get the Phuk out of here.

On the final stretch back to our room, a short but very muscular man was stomping barefoot on the dirt path, swaying, guided by a petite woman. He was shouting in Russian. Dominik wisely grabbed me by the shoulder to slow me down, hoping to avoid an encounter with someone who probably had alcohol poisoning. Now I knew how that guy from the massage parlor must have injured his feet.

Back at the hotel, we turned to each other incredulously: what had we just seen? How could one place pack so many negative impressions in in fewer than 10 hours?!?

I had never been so relieved to be at an airport as I was the next day when we flew off to Chiang Mai. But it wasn’t over yet.

We got in the long Air Asia line, behind an Eastern European woman wearing a fur vest and Ugg boots in the 90-degree heat. A middle-aged New Zealander with a 9-year-old Asian girl stood in back of us. I could smell the alcohol on him. The alcohol had made him friendly, and he struck up conversation with us, introducing the little girl as his daughter.

He quickly launched into a long, slightly incoherent story about his daughter’s Australian passport and New Zealand residency, reassuring us that her “crazy” Thai mother was in Australia and he had custody of their kid. It seemed he was used to arousing suspicion from strangers.

He continued on, complaining that he only slept for one hour last night, called the airport a “toilet,” and told us we should go to the Philippines, where everything is cheaper. The little girl was adorable, and she showed me a bad scrape and a couple of bruises under her neck, at which point her dad jumped in (a little too quickly) and called the bruise a “hicky” she got from a ‘jet skiing’ accident.

Her dad forgot to print off his boarding passes, and we were standing in the baggage drop line, so he ran off to the self-check kiosks, at which point the little girl started to get really nervous. I told her it’s fine, he’ll be right back. I got the feeling that he had left her alone a lot.

I asked the little girl a few questions about New Zealand, where she lived, and Australia, where she was from. Her dad pointed out that she doesn’t even have a New Zealander accent. And he was right—she sounded American. “From all those damn Youtube videos she watches,” he explained in this exasperated but knowing way.

And here came the despair (again). There must be many children in Phuket enduring terrible conditions, whether from poverty or being forced into the sex trade. There is that, yes, but there was also this little girl, sitting in her hotel room alone watching American Youtube videos, having so little contact with the people around her that she doesn’t even have the accent of the place she calls home. On vacation in Thailand where her drunken father was sampling the local delights: bars, brothels, and god knows what else.

The sad thing is, Phuket was probably paradise before development. But paradise is long gone. And we weren’t even in Pattong or at the sprawl of the southern beaches, just at Nai Yang beach, a small town in northern Phuket right near the airport. Yes, Phuket was an experience. It’s just one I wish I hadn’t had.

2 thoughts on “One Night in Phuket”