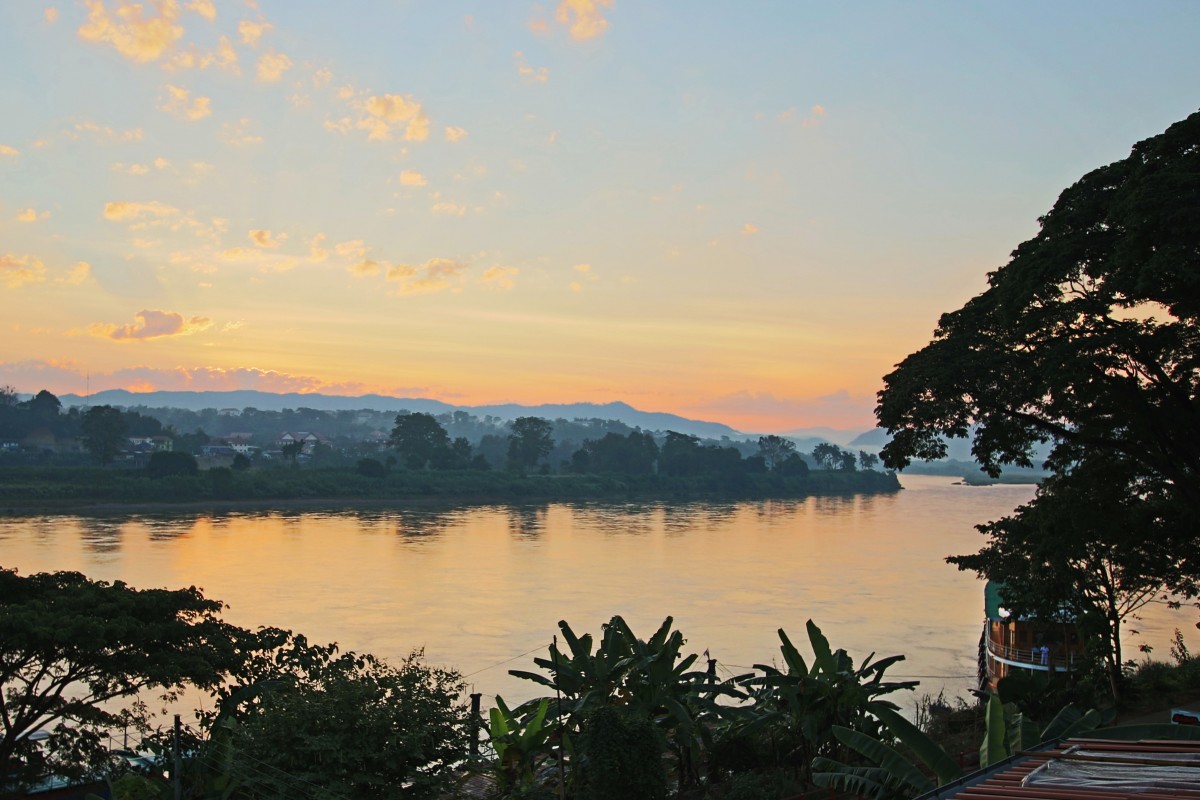 Traveling to Laos is half the fun. The southeast Asian country was virtually closed off to tourism until the late 90s, and is just opening to the world. What I had read about Laos said that things there move at a different pace: everything slows waaay down. So, we would too. We traveled to Laos from Thailand by plane, bus, taxi, foot, and finally, a 2-day slow boat cruise on the Mekong River to reach Luang Prabang, Laos.

Border Crossings to Laos from Thailand

There are several overland border crossings to Laos from Thailand, listed here from north to south:

After crossing from Chiang Khong to Huay Xai, Laos, most travelers take a slow boat trip on the Mekong to Luang Prabang. The slow boat cruise was the highlight of my trip, and is an atmospheric way to begin (or end) any trip to Laos!

There are other land border crossings between Thailand and Laos, but they do not issue visas on arrival for foreign nationals.

Visa on Arrival in Laos

For tourists from most countries, the Laos visa is available upon arrival at the overland borders mentioned above. The Laos visa on arrival is also available at all international airports in Laos.

To obtain the 30-day tourist visa at a Lao border crossing, you need a completed application form, a blank page in your passport (with at least 6 months validity), two passport-size photographs, and the visa application fee, which needs to be paid in cash.

The visa fee is determined by your nationality, and most cost around $30. The fee can be paid in US dollars, Thai Baht, or Lao Kip. We paid in US dollars, since the equivalent fee in Thai Baht is heavily inflated, and we didn’t yet have Laotian Kip. The same goes if you’re traveling to Cambodia, too, as you’ll also have to pay for a visa at the Cambodian border in cash. (As a side note: the currency in Cambodia is effectively US dollars, which are dispensed from local ATM machines.)

It’s important to note that ATMs in Laos do not always accept foreign debit/credit cards and sometimes we had to look around for one that would take our card. Unlike neighboring Thailand or Cambodia, there is a maximum withdrawal at ATMs in Laos of around $200, and a pretty hefty ATM fee of around $5-10, plus whatever your bank charges for foreign transactions. In hindsight, bringing US dollars and exchanging them for Kip in Laos probably would have been cheaper than all the foreign transaction fees we ended up paying.

We took a minibus to the border town of Chiang Khong from the downtown Chiang Mai bus station. We had bought our tickets in Chiang Mai two days in advance, as we were there at Christmas, when things book up. The bus meanders through beautiful country roads as it chugs north to Chiang Rai. I’m prone to motion sickness, and I’m glad I took a pill beforehand.

The Thai are very punctual and the bus departs on time, so it was a good thing we were there well before the scheduled departure. After about 3.5 hours, the bus made a short stop in Chiang Rai to drop off passengers and pick up new ones. Unfortunately, the bus stop is far from the White Temple, Chiang Rai’s biggest attraction, and the “layover” isn’t long enough to do much more than go to the bathroom and buy some snacks.

Try as I did, I couldn’t find a bus company that combined a visit to the White Temple in Chiang Rai on the way to Chiang Khong. If we had had more time, I would’ve taken the bus to Chiang Rai, and spent the day visiting the White Temple and the city. The next morning, or later that evening, we could’ve then taken another bus to theThailand-Laos border crossing town of Chiang Khong.

Is It Better to Stay in Chiang Khong or Huay Xai?

Border towns get a bad rep, but Chiang Khong is actually a lovely little town. I wish we had planned another day or two there to just relax. The biggest attraction is the panoramic view of the Mekong, and a long promenade that stretches for miles, which gives the town a kind of European vibe.

When we weren’t sitting on our balcony watching the river laze by in Chiang Khong, we were strolling down the river walk.

Chiang Khong is more than just a border town though. It also seems to be a local vacation destination for northern Thais, and there are plenty of nice hotels and restaurants.

But the best hotel, and best value for the money in Chiang Khong, has to be the Day Waterfront Hotel (the picture above was taken from our hotel balcony). The owners made us feel like family, and they helped arrange onward travel to Laos and book a slow boat to Luang Prabang. It’s the kind of place where guests feel so at home that everyone ends up chatting like long-lost relatives, and you find yourself going out to dinner in Chiang Khong with other new friends from the hotel.

In comparison to Chiang Khong, I wasn’t impressed by what I saw on the Lao side in Huay Xai on our way to the slow boat pier. Huay Xai is a gritty, unplanned, sprawling border town, and I’m glad we stayed in Chiang Khong.

I had been worried about being on time for the slow boat departure the next morning, but it’s not necessary to cross into Laos the night before the slow boat cruise. The Lao border station at Huay Xai isn’t crowded, even in the high season, and any of the slow boats departing for Luang Prabang know that passengers cross in the morning.

Some slow boat companies (like Shompoo Cruises) even send a representative to fetch their passengers on the Lao side of the border crossing. So, I would recommend staying in Chiang Khong for a day (or two, or three).

Plus, staying in Chiang Khong overnight before crossing to Huay Xai has another benefit: the sun rises over the Laotian side of the Mekong, and the sunrise was incredible.

Crossing the Border from Chiang Khong to Huay Xai

The border crossing to Laos is actually about 10 kilometers south of the city of Chiang Khong. From our hotel, we took a taxi  (actually, an open-air pick-up outfitted with two facing benches in the bed of the truck, quite typical in Thailand) to Thai immigration, which is located before the friendship bridge over the Mekong.

After passing through Thai border control, we exited immigration and were directed on to a bus that drove us across the bridge into Laos. The bus ride was mandatory (they did not allow people to walk) but it cost under $1.

Once we reached the other side of the bridge, the bus dropped us off and we proceeded through immigration and applied for our Laos visa on arrival.

The process actually took about a half an hour – not because it was busy or bureaucratic, but because it was breakfast time. The official working the desk took our papers, looked at down at them, and then glanced longingly at his breakfast on the table. He then put the papers down, and joined his colleagues munching on noodles and fresh herbs. The work could wait.

We got our Laos visa on arrival about a half an hour later. I took it as a promising sign: the pace of life was already slowing down. And we were in no rush. With our visas on arrival in hand, we had arrived. We were in Laos.

But the trip was just beginning. Up next was an unforgettable 2 day slow boat ride on the Mekong from Huay Xai to the ancient royal mountain city of Luang Prabang.

What was your experience crossing the border from Thailand to Laos?

4 thoughts on “Crossing the Border from Thailand to Laos”